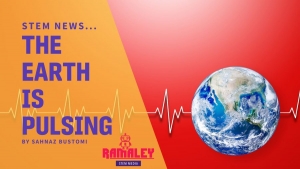 The Earth’s got a pulse

When reading news on volcanic eruptions or earthquakes, one may think that’s just Mother Earth’s current mood. But what if these geological events are actually interconnected….. 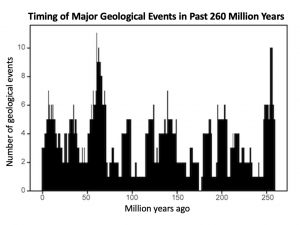 By analysing 89 well-dated major geological events in the last 260 million year, the team found that these events are generally clustered at 10 different timepoints over the 260 million years, grouped in peaks or pulses of roughly 27.5 million years apart.  Events studied included marine and land extinctions, major volcanic outpourings of lava called flood-basalt eruptions, events when oceans were depleted of oxygen, sea-level fluctuations and changes or reorganization in the Earth’s tectonic plates.

Many geologists believe that geological events are random over time. But our study provides statistical evidence for a common cycle, suggesting that these geologic evets are correlated and not random

Over the decades, researchers have proposed that major geological events happen in a cycle, but failed to quantify their investigations due to the limitations in the age-dating of geological events. However, with the help of significant improvements in radio-isotopic dating techniques and changes in the geologic timescale, Professor Michael Rampino of New York University and his team were able to obtain new data from past geological events.

The study hasn’t confirmed the absolute factor causing these pulses, but it is possible that the pulse is a function of cycles of activity in the Earth’s interior. Or perhaps the Earth’s orbit in space is affecting the pace of these pulses on Earth.

Whatever the origins of these cyclical episodes, our findings support the case for a largely periodic, coordinated, and intermittently catastrophic geologic record, which is a departure from the views held by many geologists

In case you are wondering when the next pulse is going to happen, the earth’s latest peak was approximated to be 7 million years ago. So, we are not due for a pulse for another 20 million years.

In addition to Professor Rampino, study authors include Yuhong Zhy of NYU’s Center for Data Science and Ken Caldeira of the Carnegies Institution for  Science.

Why read when you can listen?

Discover more news like this by listening to our weekly podcast STEMology.

Sign-up to our email newsletter to discover more about our mysterious world. 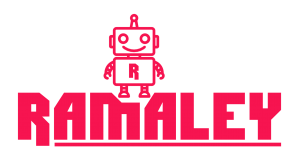 Citizen juries, Maths and the brain, Kirigami drug delivery and a Blue-eyed...

Sleepy sharks, Bird-brain song, Cure for hiccups, and The diets of rodents Scroll to top